On May 3, 2014, Intelligence Bureau’s report on impact of NGOs on development was leaked. The report has accused "foreign-funded" NGOs of "serving as tools for foreign policy interests of western governments" by sponsoring agitations against nuclear and coal-fired power plants across the country. The NGOs, said to be working through a network of local organizations  as People’s Union for Civil Liberties and Narmada Bachao Andolan. Addressed to Prime Minister's Office, the report alleges that the "areas of action" of the foreign-funded NGOs include anti-nuclear, anti-coal and anti-Genetically Modified Organisms protests. The NGOs and activists have condemned the allegations. This page tracks news articles, comments by the NGOs and activists and commentaries on the issue. 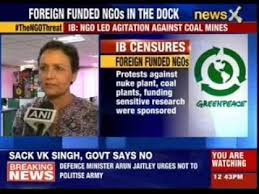 The Ministry of Home Affairs has put Ford Foundation, a powerful international NGO, under the “prior approval category” and also on its watch list in the interest of “national security”...With the crackdown on Ford Foundation, the government has now...

Greenpeace, Dissent and Freedom of Expression in India

Attempts to dampen dissent in India are nothing new. State repression and physical violence. as well as the structural violence resulting from particular economic policies, affect many regions and impact tens of millions of the country’s poorest and...

(Photo credit: Greenpeace) On 9th April 2015, the Ministry of Home Affairs (MHA) suspended Greenpeace India's foreign funding. The MHA claimed that the environmental NGO's registration had been cancelled because Greenpeace had “prejudicially affected ...

he Union Home Ministry's move to suspend Greenpeace India's foreign funding appears to have been driven by its findings that the NGO has deprived Indian citizens of low-priced energy by derailing the Mahan coal project and the fear that it would next...

The government has blacklisted 69 NGOs from receiving foreign funds, junior home minister Kiren Rijiju told Lok Sabha...among those NGOs which were prohibited from receiving the foreign funds include 14 from Andhra Pradesh, 12 from Tamil Nadu, five...