The content is also available in the following languages: 简体中文, 繁體中文

Subject: Clarifications on the Report of the Namtha Hydro Project in Laos

[...] [A]fter a thorough investigation into the issues raised in the “Lao Villagers Relocated from China-Backed Dam Lack Land to Grow Crops” article, we have concluded that the contents described in the article were seriously inconsistent with the actual situation. Our fact-based formal response and clarifications are as follows:

I. Basic Information of the Namtha 1 Hydro Power Project in Laos

The Namtha 1 Hydro Power Project, located in Pha Oudom County, Bokeo Province in northern Laos, is jointly invested in by China Southern Power Grid International Company (CSGI) and Electricite du Laos (EDL), with an installed capacity of 168 MW. As required by the Laotian government, the project has adhered to the principles of benefiting people and harmonious development, and aims at creating favorable conditions to improve the infrastructure and livelihood for residents in the poverty-stricken mountainous area of northern Laos.

Throughout the project’s construction, CSGI has honored its corporate social responsibility. Insisting on green and universally-beneficial development, we spent three-and-a-half years relocating and settling the nearly 10,000 local residents, building numerous infrastructures, and assisting the residents’ adaptation to new environment and new life. All of these were strongly endorsed by both the Laotian government and the migrants themselves.

II. Clarifications on the Issues Raised in the Article

1. Land Distribution
The article claimed that “all the moved villagers have now settled in, but have been left with no land to work” & “only a few of us have farmland in areas that haven’t flooded, but most of us don’t”. These two statements are seriously inconsistent with the facts. Actually, relocation of migrants and the distribution of land for productivity purposes have been completed. Here are the facts and figures: relocation involved 10,523 residents from 1,707 households in 37 villages in two provinces. The breakdown is 566 households from 10 villages in Pha Oudom county, Bokeo province, and 1,141 households from 27 villages in Nalae county, Luang Namtha province. Thus, 1,707 houses in 11 settlement points were needed. As of April 2018, construction of all settlement points and migration of residents had been completed. 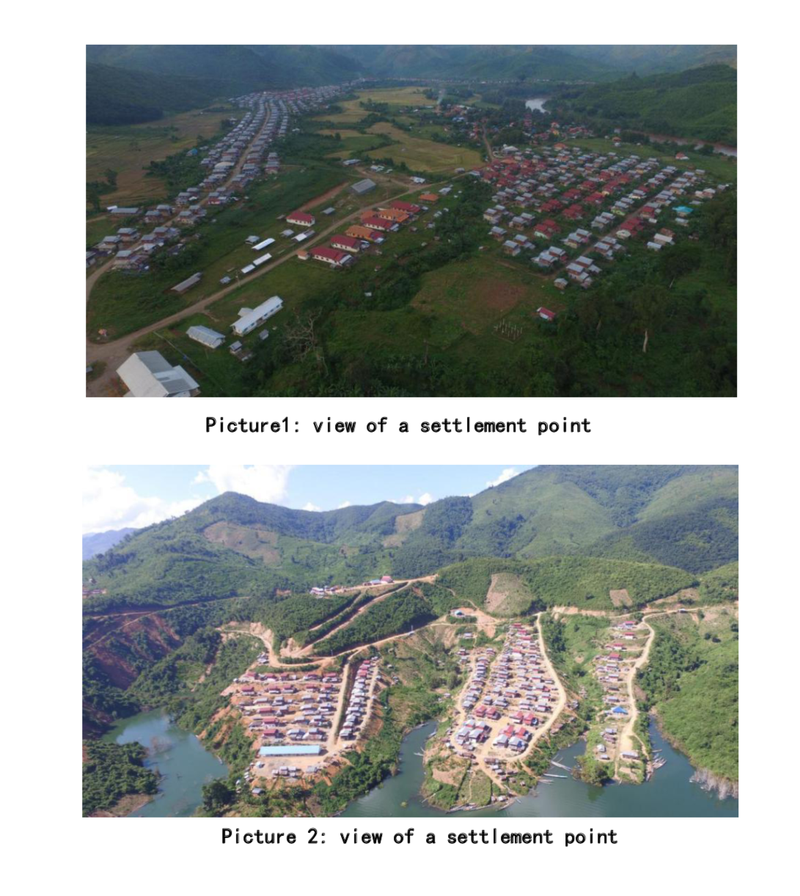 In line with the government’s migration policy, residents migrating to remote places were distributed with new farmland, while residents moving voluntarily to higher areas (i.e. those at a lower risk of flooding) will continue to farm their existing land. Land distribution and the drafting of the working plan were done by the migration committees at provincial and county levels. The Project office was tasked with building roads to the farmlands. At this point, farmland distribution and road reconstruction have both been completed.

All the 566 households of migrants in Pha Oudom county, Bokeo province were to move to remote settlement points. New farmland distribution was completed and 566 land certificates were issued. A 12-km road from settlement points to farmlands was accepted and turned over to the county government.

Among the 1,141 households in Nalae county, Luang Namtha province, 13 households volunteered to move, 692 households moved to higher areas at a lower risk of flooding, and 436 households moved to remote places. All land distribution was finished and 436 land certificates were issued. A 34.6-km road from settlement points to the farmlands was accepted and given to the county government. 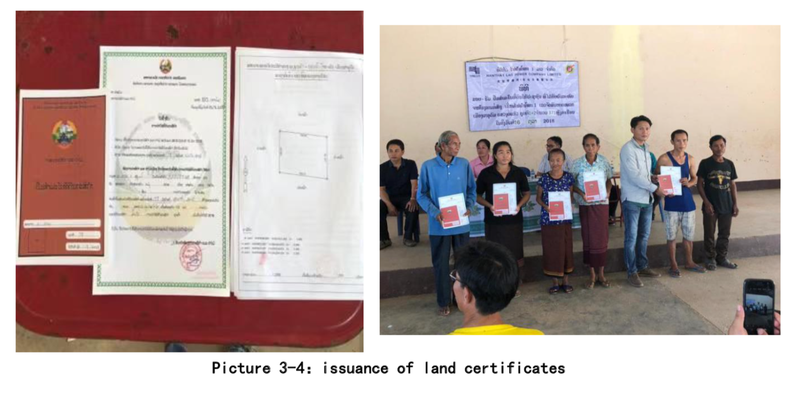 The article claimed that there was “displacement of villagers without adequate compensation”, which is seriously inconsistent with reality. Actually, livelihood restoration plans based on the compensation policies were launched and adopted by the two provincial governments and people’s congresses. The compensation fees have already been given to the migrants.

The article claimed that “the water we do have isn’t treated” & “we have to travel on steep slopes in order to fetch water from the river”, which are totally fabricated. In fact, to guarantee domestic water usage, we built a gravitational water supply system which includes tap points, pipes, reservoirs and fetching points. The water quality passed local safety standards. Migrants’ water usage has remarkably improved compared to the previous situation, when they had to fetch water from faraway places.

The project company puts livelihood restoration high on our agenda. Firstly, we built numerous facilitating infrastructures such as village halls, offices, markets, schools with dormitories for teachers, clinics, temples, power transmission lines and roads – all of which have significantly improved migrants’ livelihoods. Secondly, the project company carried out careful research before building the drainage system, to ensure the proper placement of the settlement points, as well as to protect the migrants against seismic disasters. After the distribution of the farmland, we hired contractors and agricultural specialists to station in the settlement points We then built agricultural demonstration bases, bought tools, seeds and other material, started horticulture, handicrafts, etc so as to improve their income and livelihood. 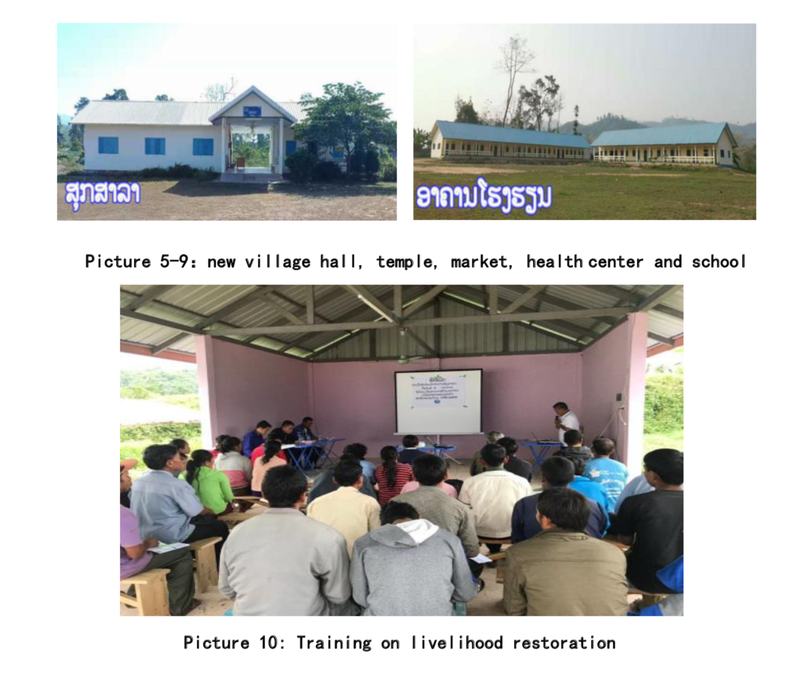 Apart from the settlement of migrants, we have delivered on corporate social responsibility locally, as well as provided continued support to improve the living standards of migrants and non-migration villages around the power plant. The measures include:

1. The Jamba Flower campaign since 2014: every year, we donate books, stationery, sports facilities and daily goods to schools, settlement points and villages.

2. We built two electronic classrooms and equip them with computers and printers. A donation ceremony was held in the settlement point in Hamo village, Bokeo province on November 4th 2017.

3. We built a 5-km road that linked Hatnam village, which was on the lower reach of the power plant, with the outside world. Previously, the only way for villagers to leave was via the waterway.

4. We donated broadcasting systems to 11 villages on the lower reaches of the power plant, bringing a new recreation style to the villagers. 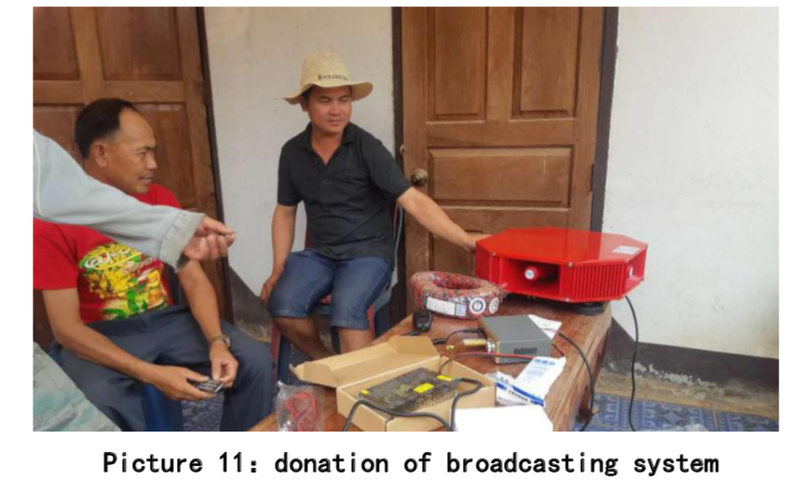 5. The Bokeo provincial government awarded the Namtha 1 Hydro Power Plant project an “Honorary Certificate for Outstanding Contribution in Economic and Social Development” to recognize what the project company has done for local communities.

6. We built two schools in the nearby villages of Vangleck and Hatnam (both non-migrant villages) and turned them over to local education authorities to be put into use on December 30th 2020. The Bokeo provincial government issued the Special Award for Educational Development to Namtha 1 Hydro Power Plant project. The Laos-China Friendship Association sent a Letter of Gratitude to thank us for building the two schools. The letter spoke highly of our contribution to educational development and poverty alleviation in the country’s remote areas. 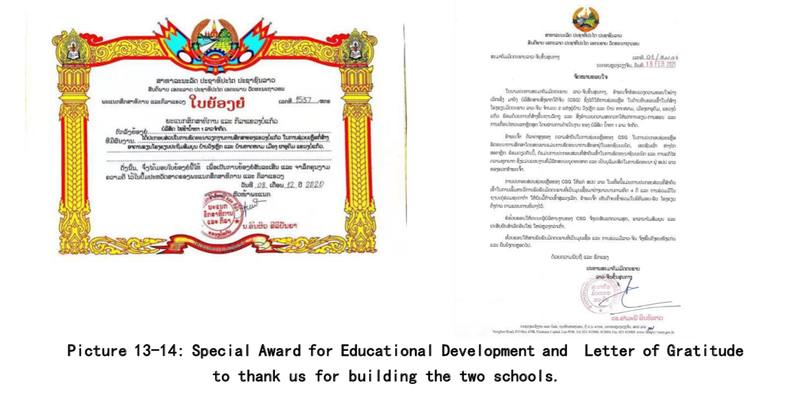 In conclusion, the Namtha 1 Hydro Power Plant project was planned, constructed and is operated as required by and under the guidance of the Laotian government. The project company delivered on its corporate social responsibility, trying its utmost to relocate residents in the nearby areas, settling them down and restoring their livelihood. These actions were highly endorsed by local governments and the migrants themselves. The article posed by RFA contained statements that are seriously inconsistent with the real situation, and served to distort the truth and mislead readers. Therefore, it is our hope that RFA and other relevant news agencies work in the prudent and objective fashion by reporting on the basis of respecting the truth, correct mistakes and apologize timely, to eliminate the adverse effects.

Our clarifications are written above. 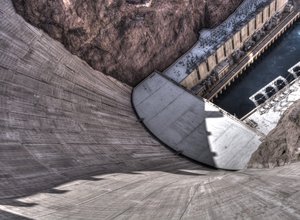