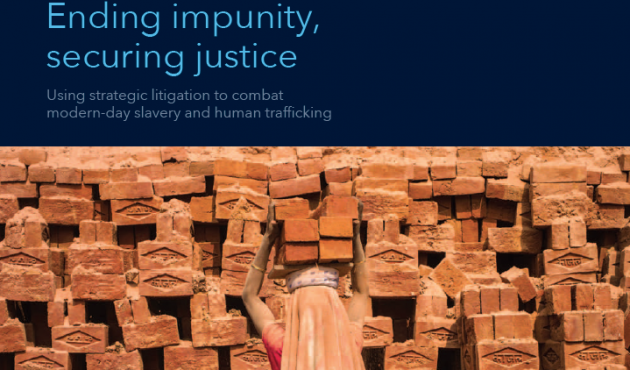 The report, jointly published by the Human Trafficking Pro Bono Legal Center and the Freedom Fund, draws on insights gleaned at a convening of leading human rights lawyers, advocates, and litigators from around the world. The meeting, held in London in May 2015, focused on lessons learned from successful human trafficking litigation. The experts who attended the meeting expressed a commitment to eradicate human trafficking and modern slavery in global supply chains. [refers to Signal, KBR, Nestle, Costco, Nevsun]

"Modern-day slaves are suing the traffickers"

The dirty secret of today's human trafficking is that almost no one is held accountable. Modern-day slavery, particularly in the transnational supply chains of major international corporations, is too often a risk-free proposition...

...A network of private lawyers, many working pro bono, has grown to fill this accountability lacuna. Slowly, victims held in modern day slavery are learning that they can bring their own suits for damages against the perpetrators. We are on the cusp of a new movement: accountability litigation to end modern-day slavery. [refers to Signal International]

Around the world, investigative reporters regularly unearth stories of human trafficking and modernday slavery. Human rights organizations document forced labor abuses in report after report. These stories dominate headlines and inspire editorials. They provoke community outrage. But how can outrage be turned into action? How can we break the scandalous trade in human lives? How can we put an end to modern-day slavery? In recent years, strategic litigation has been used to hold both states and private actors accountable for these gross violations of human rights. It is one of the most promising mechanisms - if not the most promising method - to secure justice for victims, punish perpetrators and drive lasting reform. A number of landmark cases heard by civil courts, as well as by regional and international human rights bodies, have resulted in significant verdicts. In one case, a United States company found to have used forced labor was pushed into bankruptcy. Most importantly, strategic litigation greatly increases the risks to those involved in human trafficking. It is a direct challenge to the impunity they currently enjoy and establishes a potent deterrent to would-be traffickers. Courts are helping to draw a line in the sand, putting their judicial weight behind international human rights standards and national laws that prohibit human trafficking and slavery in any form. However, the courts can only adjudicate on matters that are brought before them. We must build on this early momentum.