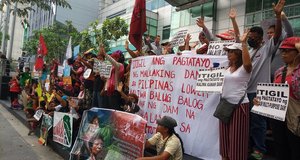 Human rights defenders (HRDs) across the globe are protecting our rights, natural resources and shared planet. Their work highlighting risks in company operations and supply chains and advocating for responsible business practices is vital to support a just transition to green economies and a more sustainable future for all. Human rights defenders in Asia-Pacific investigate river pollution, report on corruption and illegal mining, advocate for workers’ rights and protect forests – to give just a few examples.

Despite this critical work, HRDs in Asia-Pacific often experience high levels of risk and strong backlash by both State and non-State actors. They face myriad challenges, including the weaponisation of laws to prevent and silence their work such as restrictive legislation on NGO registration and laws limiting receipt of international funding; smear campaigns labelling them as anti-development, terrorists or communists as a means to discredit their human rights work; judicial harassment; death threats; and killings.

Between 2015 and 2021, we recorded more than 4,100 attacks on human rights defenders (HRDs) raising concerns about business-related human rights abuses. During this period, Asia-Pacific has consistently been among the two most dangerous regions for HRDs focused on business. In 2021, Asia-Pacific recorded the greatest number of attacks in the world, and three out of five of these were against climate, land and environmental defenders.

● In 2021, Asia-Pacific was the region with the highest number of attacks (247) against HRDs focused on business.

● Attacks against HRDs in Asia-Pacific relate to almost every sector. The top three most dangerous sectors were all natural resource sectors: mining (297), agribusiness (187) and logging and lumber (104).

● Three out of five attacks in Asia-Pacific in 2021 were against climate, land and environmental rights defenders.

● Companies linked to attacks against HRDs in the region were most frequently headquartered in Indonesia (61), India (51) and the Philippines (50).

● Nearly one quarter of attacks in Asia-Pacific were against women HRDs.

● Judicial harassment, including arbitrary detention, criminalisation and strategic lawsuits against public participation (SLAPPs), is the most common type of attack against HRDs in Asia-Pacific.

The Resource Centre collects data on attacks on defenders that are targeted because they raise concerns about business sectors and operations. Collecting data about attacks on defenders is important in order to analyse patterns of violence, identify at-risk business sectors and geographic areas, and provide support to targeted individuals and groups.