... These answers are based on the only investment approved by the EIB mentioned in your report, as well on the general EIB approach to financing operations in this sector:

2. How does EIB monitor progress on its efforts to address human rights risks and impacts of these investments?

The EIB monitors projects from the signature of the loan contract through the project implementation and operation phase until the loan is paid back. Monitoring requirements are determined according to the characteristics of each project.

In the case of the Nenskra HPP project, and although no EIB financing has taken place yet, the EIB is closely working with the project promoter, the other financiers and all the other stakeholders concerned, to address the different issues related to the project. ...

Drying up: Investors respond to allegations faced by hydropower projects they fund in EECA 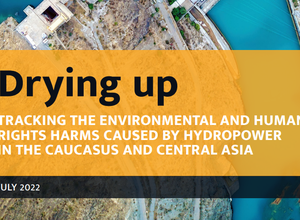