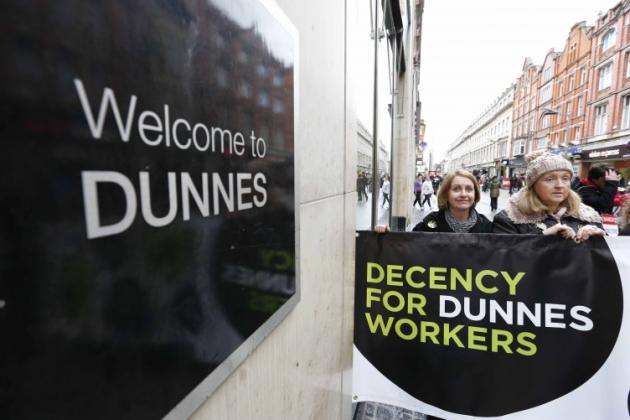 Dunnes Stores did not respond

A PETITION with over 10,000 signatures from members of the public over the past five days was handed into Dunnes Stores HQ on Georges Street in Dublin City Centre at lunchtime on Wednesday in solidarity with staff who claim they have been victimised and even sacked after taking part in a one-day strike on 2 April over working conditions....Siobhán O’Donoghue, spokesperson for Uplift, said:“Dunnes Stores cannot afford to ignore public pressure. They know only too well the damage that could be inflicted to the company's ‘bottom line’ if the public turn against them. Ten thousand people represents a lot of customers.”

Dunnes Stores workers belonging to the Mandate trade union are to escalate their dispute over low-hour contracts and union negotiating rights. The move was decided at a meeting of the union's National Disputes Committee today, but a date has not yet been set for further industrial action...It will also look at potentially taking individual cases on behalf of workers allegedly victimised after taking part in the one-day strike on 2 April.

Mandate Trade Union has...condemned Dunnes Stores for targeting staff who participated in the nationwide strike last Thursday, 2nd April. The union has received reports from members all over the country who have experienced..[d]ismissals[,] [c]uts to hours[,] [c]hanges in roles[,] [c]hanges in shift patterns...Gerry Light, Mandate Assistant General Secretary said: “As a very last resort, and with no other option available to them, our members in Dunnes Stores took legitimate and reasonable industrial action. “All they want is for their company to meaningfully engage with them through their union, with the objective of creating decent working conditions. Now, their employer is blatantly targeting people with the hope of intimidating their own loyal staff and turning them away from any future trade union activities,” said Mr Light.