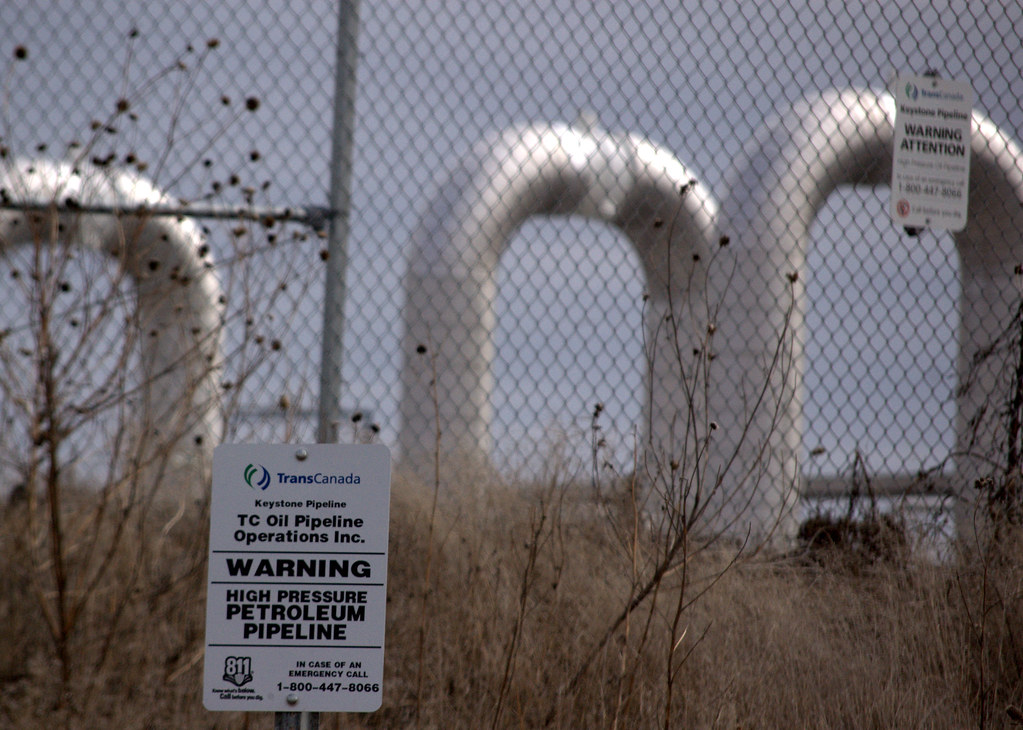 TransCanada said in a statement Thursday 795,000 litres of oil leaked from an underground section of its Keystone pipeline near Amherst, S.D., about 64 kilometres west from the Sisseton Wahpeton Oyate of the Lake Traverse Reservation. Sisseton Wahpeton Oyate tribal chairman David Flute said his community is concerned the leak, the largest by the Keystone pipeline in South Dakota to date, could pollute the area's aquifer and waterways...Keystone XL has faced stiff opposition from Nebraska landowners and Native American tribes.

Dallas Goldtooth, with the Indigenous Environmental Network, said..."It poses a risk to the Indigenous rights of tribal nations all along the route and it's a complete disregard for free prior and informed consent as guaranteed on the UN Declaration on the Rights of Indigenous Peoples...It puts at risk the drinking water of over 65,000 Indigenous peoples along the route." ... Brian Walsh,...with the South Dakota Department of Environment and Natural Resources, said...the majority of the spilled crude remained underground...and there were no major waterways or residential wells in the immediate vicinity...

Flute said the Sisseton Wahpeton Oyate tribe ... have been concerned about the impacts of pollution...[saying] even green energy poses a risk in his territory..."In my reservation we are right directly in the middle of the Midwest migratory route...There is some concerns with the wind power that are going up, too."

TransCanada crews safely shut down its Keystone pipeline at approximately 6 a.m. CST after a drop in pressure was detected in its operating system resulting from an oil leak that is under investigation. The estimated volume of the leak is approximately 5,000 barrels... Crews, including TransCanada specialists from emergency management, engineering, environmental management and safety as well as contracted, nationally recognized experts are assessing the situation. TransCanada is providing State and Federal regulators, including the Pipelines and Hazardous Materials Safety Administration and the National Response Center, with accurate and confirmed information on an ongoing basis...

The safety of the public and environment are our top priorities and we will continue to provide updates as they become available.

The spill in Amherst, S.D. happened a few days before regulators in Nebraska were to decide whether to grant a final permit to begin construction on the Keystone XL Pipeline in that state. According to a statement from TransCanada, “[C]rews safely shut down its Keystone pipeline at approximately 6 a.m. CST... after a drop in pressure was detected in its operating system resulting from an oil leak that is under investigation... Kim McIntosh, an environmental scientist with the South Dakota Department of Environment and Natural Resources... no livestock or drinking water sources appeared to be threatened,,, [and] that the leak of 210,000 gallons was not substantial and that the area was rural, which is “very positive.”

John Dossett, who serves as General Counsel at the National Congress of the American Indians [said]... “The bottom line is that pipeline spills are inevitable, it is not a question of if but when. Where lands or waters are affected by a federal decision, the trust duty requires that the government must protect tribal interests. Tribes are not opposed to development, they often welcome it. But this most recent spill underscores the need for tribal rights to be fully considered and protected by the federal trustee.”

UPDATE: The Nebraska Public Service Commission voted 3-2 to approve the mainline alternative route for the Keystone XL pipeline through the state. The commission rejected TransCanada's preferred route...[C]ommission member Chrystal Rhoades said she was against the pipeline regardless of the route...and...was still worried about the environmental impact.... The Nebraska Public Service Commission [did] not factor in Thursday's 210,000-gallon spill from Transcanada's Keystone Pipeline, which leaked thousands of gallons of highly polluting tar sands oil on South Dakota farmland. That's because pipeline safety is a federal responsibility. Under a 2011 state law, the Public Service Commission is not allowed to factor in pipeline safety or spill risks.

...[T]he KXL, which will move more than 800,000 barrels of crude per day from Alberta, Canada to refineries on the Gulf Coast via connecting pipelines. The pipeline will run through a dozen Nebraska counties...As the KXL's proposed route crosses the Ogallala Aquifer, a major underground deposit of fresh water, a spill could threaten waterways and drinking water sources. Opponents also cite the potential contamination and destruction of Native American land... “Nothing has changed at all in our defense of land, air and water of the Oceti Sakowin Lands," said Faith Spotted Eagle, a member of the Yankton Sioux Nation. “If anything it has become more focused, stronger and more adamant after Standing Rock."