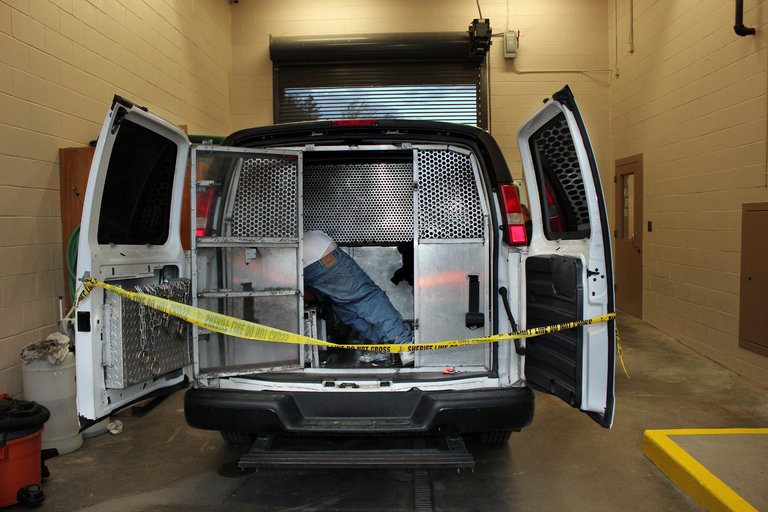 In July 2012, Steven Galack...was living in Florida when he was arrested on an out-of-state warrant for failing to pay child support... Now, he was to be driven more than a thousand miles to Butler County, Ohio, where his ex-wife and three children lived, to face a judge.

Like dozens of states and countless localities, Butler County outsources the long-distance transport of suspects and fugitives. Mr. Galack was loaded into a van run by Prisoner Transportation Services of America, the nation’s largest for-profit extradition company.

Crammed around him were 10 other people, both men and women... They sat tightly packed on seats inside a cage, with no way to lie down to sleep. The air conditioning faltered amid 90-degree heat.... On the third day, the van stopped in Georgia, and one of two guards onboard gave a directive to the prisoners... The [other prisoners] began to stomp on Mr. Galack, two prisoners said.  The guards said later in depositions that they had first noticed Mr. Galack’s slumped, bloodied body more than 70 miles later, in Tennessee. A homicide investigation lasted less than a day... The cause of death was later found to be undetermined...

A Marshall Project review of thousands of court documents, federal records and local news articles and interviews with more than 50 current or former guards and executives reveals a pattern of prisoner abuse and neglect in an industry that operates with almost no oversight.

Since 2012, at least four people, including Mr. Galack, have died on private extradition vans, all of them run by the Tennessee-based Prisoner Transportation Services.

Robert Downs, the chief operating officer of P.T.S., declined to comment on the deaths. He said guards were instructed to contact local officials when a serious medical emergency arises. “Unless it’s life or death, we can’t open the cage on the vehicle,” Mr. Downs said. “We don’t know if they’re setting us up for something.” This concern was echoed by guards at several companies, who said prisoners often feigned illnesses and injuries...

At least 14 women have alleged in criminal or civil court since 2000 that they were sexually assaulted by guards while being transported by these companies... [The federal] Jeanna’s Act, passed in 2000 [to regulate the industry]...is almost never enforced.