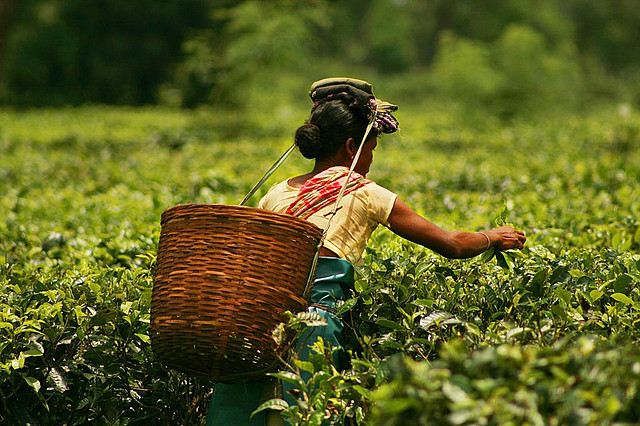 In June 2018 Yorkshire Tea (part of Taylors of Harrogate) became the first major UK tea brand to publish its supplier list. The brand made the move following the "Who picked my tea?" campaign by Tradcraft Exchange. In August 2018, Twinings followed suit and published its full list of tea suppliers. In November 2018, Tetley (part of Tata Global Beverages) became the third British tea company to release a list of its suppliers. Clipper followed suit shortly after, making it the fourth British tea brand to do so. In January 2019, Unilever shared details of suppliers for all its British tea brands, including market leader PG Tips, and in September 2019 revealed its global tea suppliers. In April 2019, Typhoo pledged to release a list of its suppliers.

"Who picked my tea?" challenges the major tea brands to do more to tackle the poverty wages and poor conditions faced by workers on the tea estates in Assam. The campaign asks the six major brands, which together have 67% of the retail market, to publish which tea estates they are buying from in order to build transparency as a first step to bringing accountability for the working conditions.

On 5 March 2019, Marks & Spencer became the first British supermarket to publish details of its tea suppliers in response to the campaign. Traidcraft Exchange, the charity behind the campaign, is calling on other supermarkets to follow suit, particularly given the impact of their lower prices on the industry.

Consumer goods giant Unilever released a list of its global tea suppliers on Thursday, bolstering a drive to stamp out worker exploitation and modern-day slavery on plantations.

The move by the Anglo-Dutch food group - which buys 10% of the world's tea supply and owns at least a dozen major brands from PG Tips to Lipton - followed a charity campaign that successfully saw Britain's six top tea firms reveal such data...

"Unilever's decision to publish its global supplier list gives the women who pick the tea we drink more power to push for better pay and conditions, wherever they work," Traidcraft Exchange's policy adviser Tom Wills said...

"Making the supplier list public means tea workers can complain directly to a global brand when standards fall short of what is being advertised to western consumers"...

The data published by Unilever revealed that it uses tea suppliers in countries including India, Bangladesh, China, Argentina, Turkey, Uganda and Indonesia...

Yet academics and business pressure groups have previously told the Thomson Reuters Foundation that abuses do not stop due to greater transparency alone, and called for action from better dialogue with workers to the introduction of a fair living wage.

Efforts to tackle slave-like conditions in the tea industry got a boost on Friday when Typhoo became the final major British tea brand pledging to release a list of its suppliers.

Yorkshire Tea, Twinings, Tetley, Clipper and PG Tips all made the same decision in the last year.

Typhoo's move comes in the wake of advocacy group Traidcraft Exchange's "Who picked my tea?" campaign, begun last year to improve working conditions and low pay in Assam, India, where most British tea is grown...

The list will be available later this month, Typhoo said.

"Typhoo's tea declaration means that we now know where the vast majority of the tea we drink in the UK comes from," said Mary Milne, head of campaigns and communications for Traidcraft Exchange.

"More importantly, women in Assam who pick tea for us now know exactly where it ends up."

Marks & Spencer has become the first British supermarket chain to publish details of its tea suppliers, responding to a campaign to address worker abuses on plantations.

Traidcraft Exchange, the charity behind the campaign for greater transparency, said it hoped more supermarkets would follow suit as it announced the move, citing the impact of their lower prices on the industry...

Major British tea brands including Twinings, Tetley, and PG Tips have already made similar pledges in response to concerns of labour abuse highlighted in the "Who picked my tea?" campaign for transparency and improved working conditions.

Marks & Spencer has published information online about its supply chains since 2016, but this is the first time it has chosen to include tea and coffee...

Traidcraft Exchange said there was more work to be done in tackling modern slavery in the tea industry, but that this response reflected a wider change in consumer attitudes...

Food giant Unilever shared details of suppliers for all its British tea brands, including market leader PG Tips, after a campaign for transparency by charity Traidcraft Exchange...

When the campaign first launched last year, none of the major brands shared details of their suppliers...

Data published by Unilever showed that it uses a number of suppliers in Assam as well as plantations elsewhere in India and in Indonesia, Japan and Kenya.

“We believe it’s important to know where our tea comes from as this is the starting point for any action that makes a positive impact where it matters most,” Unilever said in a statement...

Traidcraft will use the data to help workers in Assam identify who is buying from the plantations where they work and ensure welfare pledges made by brands are upheld...

Yorkshire Tea, owned by Bettys and Taylors of Harrogate, was the first to publish in July 2018, followed by Twinings, Tetley, Clipper...

British tea brand Clipper released a list of its Indian suppliers on Thursday, joining a growing campaign to improve worker conditions in the state of Assam and rid the industry of widespread abuse.

"We believe that providing transparency on where we source our tea from will help build a more sustainable supply chain by empowering all stakeholders in the tea industry," said Rebecca Vercoe, Clipper Teas brand controller.

The upmarket tea brand was the fourth to reveal all the plantations it uses in India's Assam state for its black tea.

It was also the most detailed, with the names and addresses of all estates listed, according to the charity Traidcraft Exchange, which called on other brands to follow suit.

India's tea industry, the second largest in the world after China's, employs 3.5 million workers, many of whom are paid below minimum wage and live in poverty on the plantations where they work, research has shown.

Tea grown in Assam, in northeast India, is used in many blends sold by British tea companies...

But it is also the site of widespread worker abuse and underpayment, according to research into the industry.

Tetley, the world’s second biggest tea company, has released a list of its suppliers, including those in India, to boost transparency in its supply chain, the British firm’s owner Tata Global Beverages said...

“The information has been put up in response to changing consumer expectations in the U.K., regarding transparency in the supply chain,” a spokesperson for Tata Global Beverages [said]...

Tata Global Beverages says it works to ensure all its suppliers meet ethical standards and follows a strict code of conduct to “ensure slavery and human trafficking is not taking place anywhere in our supply chains”...

Genevieve LeBaron, a politics professor at Sheffield University and leading anti-slavery academic, said ... transparency ... needs to be followed up with action to transform the business models and supply chain dynamics that promote exploitation...

“(The list) must then be accompanied by meaningful dialogue with workers to properly address the risks they identify,” said Joe Bardwell, a spokesman for the British-based Business & Human Rights Resource Centre (BHRRC).

Tea firm Twinings published a list of the Indian plantations it buys from on Monday, citing the need for transparency to improve conditions in an industry experts say is rife with abuse.

India’s tea industry, the world’s second largest, employs 3.5 million workers and studies have found many live in appalling conditions, below the poverty line...

The British charity [Traidcraft Exchange] launched the campaign ‘Who picked my tea?’ to bring about change for plantation workers in Assam through increased transparency.

It comes as major brands face mounting regulatory and consumer pressure to ensure their products are free of slavery and abusive practices.

Many British blends include tea from Assam, where people get poverty wages, are scared to speak up and have no way out. The big British brands know this but aren’t doing enough to challenge it.

But you can get them to do more. It starts by asking a simple question: who picked my tea?

As a business we recognise the role that transparency can play in helping create more resilient and sustainable supply chains and for this reason we’re committed to sharing information about where we source tea, coffee, herbs and packaging for our Yorkshire Tea and Taylors of Harrogate ranges. At its heart is the idea that knowledge and sharing information underpins effective action. Being open about where we buy from enables collaboration. It can help businesses, civil society and producers work together constructively and positively on problems that can’t be solved alone. Through Taylors Sourcing Approach (TSA) – our model for how we buy our tea, coffee, herbs and packaging – we’ve laid the foundations to build a more sustainable supply chain. Thanks to TSA we work in partnerships with strategic suppliers via long-term contracts to improve quality and social and environmental standards. The lists below include all current suppliers for our Yorkshire Tea range – though some may supply us with smaller volumes or not currently be part of Taylors Sourcing Approach. While we have full traceability for all the coffee we purchase we’re waiting for final permission from some of our suppliers. As such our coffee list is partial although we have made it clear where we have gaps. We hope to have this completed by the end of June 2018. This is our first step toward supply chain transparency. We don’t have all the answers and recognise that there’s always more to do. However, we’re committed to building our approach over time