The content is also available in the following languages: español 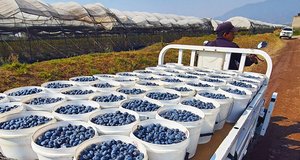 On the frontline of the multi-million-dollar berry industry, Mexican agricultural workers endure squalid living conditions and consistent work
insecurity as they undertake back-breaking work to line the pockets of multinational companies. This, coupled with a lack of access to effective worker representation to challenge conditions, has created a climate of exploitation which is crying out for more effective labour rights regulations.

Agricultural workers travel from different states including Oaxaca, Guerrero, Chiapas and Michoacán in search of work in the berry fields of the country’s northern and central regions to power the production of Mexico’s primary agricultural export. The fruit they plant, pick and transport, which ends up on kitchen tables in the United States and 37 other countries, contributes to a highly lucrative agricultural industry. Despite the sector’s reliance on informal labour and the dominance of a handful of major companies with significant resources, our research shows companies are currently failing to adequately respect the rights of berry workers.

Supply chains are characterised by a severe lack of transparency and human rights due diligence (HRDD); while both are increasingly referenced in company policies, they remain lacking in practice. Only 24 of the 60 companies included in our analysis publish basic information such as location and contact details on their websites, and just two of 24 companies responded to our outreach on human rights due diligence.

Interviews conducted as part of our research show workers experience precarious working situations during high-intensity physical labour due to irregular contracting conditions, leaving them in insecure jobs. As Enrique, a berry picker from Michoacán, told us:

…Sometimes we are hired for one or two months; in other instances, we can be hired for five months. They can also offer you extra hours, but those do not appear in the contract… Even if you work in the same field during various seasons, this work has no career [progression]. Every time you sign a new contract.

This briefing demonstrates the urgent need for action by companies and the Mexican Government to ensure respect for workers’ rights in agricultural supply chains.