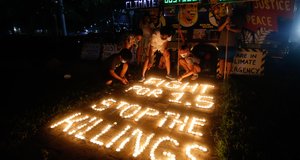 Southeast Asia hosts almost 20% of all known species of the world, and protection of biodiversity and natural resources in the region is essential to address the climate crisis. Human rights defenders (HRDs) in Southeast Asia play a crucial role in protecting the environment, championing rights-respecting societies and ensuring a just transition to green economies. Their work advocating for responsible business practices and drawing attention to risks and harms in company operations and supply chains is vital to support a more sustainable future, both within the region and globally.

Despite this critical work, people defending labour, land and environmental rights across the region often experience strong backlash by both State and non-State actors and face high levels of violence and repression, including threats, judicial harassment and killings, as well as smear campaigns.

Between 2015 and 2021, we recorded more than 4,200 attacks on human rights defenders (HRDs) raising concerns about business-related human rights abuses. During this seven-year period, Asia-Pacific and Latin America have consistently been the two most dangerous regions for HRDs focused on business and nearly a quarter of all attacks globally (22% or 916 attacks) have occurred in Southeast Asia. In 2021, three out of the four most dangerous countries for HRDs in Asia-Pacific were located in Southeast Asia: the Philippines, Cambodia and Indonesia.

● Attacks against HRDs in Southeast Asia relate to almost every sector. The top three most dangerous sectors are all natural resource sectors: mining (230), agribusiness (207), and logging and lumber (89).

● Three in 10 attacks in Southeast Asia were against women HRDs.

● Three in five attacks were judicial harassment (including arbitrary detention, criminalisation and strategic lawsuits against public participation - SLAPPs), which is the most common type of attack against HRDs in Southeast Asia.

The Resource Centre collects data on attacks on defenders that are targeted because they raise concerns about business sectors and operations. Collecting data about attacks on defenders is important in order to analyse patterns of violence, identify at-risk business sectors and geographic areas, and provide support to targeted individuals and groups.