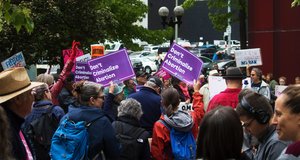 The United States (US) Supreme Court’s June 2022 decision in Dobbs v. Jackson Women’s Health Organization rolled back reproductive rights and access to abortion across the country. Dobbs' overturn of Roe v. Wade meant that historic abortion bans took effect again, as did numerous restrictive abortion laws passed since 1973. In some of the most restrictive states this has put pregnant people’s lives at risk. It has also opened the possibility for people to be punished for seeking abortions, healthcare professionals to be punished for providing them, and friends and family members to be punished for helping people access abortions.

Digital and human rights experts warned that data collection by technology and financial companies could be used in investigations and court cases to enforce anti-abortion laws. This poses significant risks to people’s right to privacy, as well as other fundamental rights and freedoms. In response to these concerns, we invited 63 technology and financial companies operating in the US and collecting user or payment data to respond to survey questions on their transparency and human rights due diligence processes. Fourteen companies responded. Their responses revealed limited transparency, gaps in human rights due diligence processes to understand rights implications associated with data collection in this context, a woeful lack of knowledge on how data collection could contribute to violating users’ rights, and apparent gaps in company policies and practices regarding third-party access to data, including government requests for access to information.

・ Eight out of 14 companies acknowledged the US Supreme Court decision in Dobbs vs. Jackson Women’s Health Organization restricting access to abortion and reproductive healthcare.

・ Five companies (Bank of America, Citigroup, Glow, Med ART Studios, and Meta) did not share information regarding their policies or guidelines to address government requests, notifications to their users, or steps to challenge unlawful government or law enforcement requests for user data.

Companies must take steps to protect users' rights to privacy and freedom of expression, and address how that data may impact other rights including reproductive rights and access to healthcare. Failure to conduct meaningful human rights due diligence in line with the UNGPs to identify, prevent, and mitigate human rights risks will result in the restriction of health rights and reproductive freedom.

Read all the responses we received from tech and finance companies

In States where abortion has been criminalised, digital rights experts warn that data tracking and digital surveillance methods could be used to target individuals who have had or facilitated abortions.

Technology offers powerful tools for society, but restrictions to digital freedom and developments in artificial intelligence, automation and robotics raise serious concerns about the impacts on human rights and the future of work. Explore our resources on tech and rights.