…As per our previous response dated April 14, 2021, From March 23-25 the northwest region of Maranhão State, Brazil received exceptionally heavy rain (more than 450 mm), described as a 1-in-10,000-years rain event. Widespread flooding in the region washed out many roads and increased turbidity in waterways and local sources of drinking water. Along with many other lakes and rivers in the region, on March 25 a small freshwater pond on our property known as Lagoa do Pirucáua overflowed.

The overflow continues to be incorrectly reported by some independent media outlets as a “tailings dam” failure. There was no tailings dam failure. The heavy rain event and resulting regional flooding had no impact on the operational structures at the mine, including our pits, tailings storage facility and waste rock facilities, which remain intact and operating normally. These facts have been confirmed by regulators as published on the Brazil National Mining Agency’s website. A third-party report has also confirmed there was no release of “toxic chemicals” from the mine as alleged in some articles. 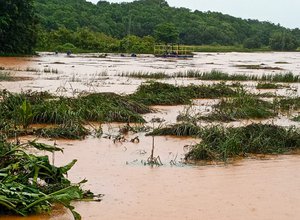