Respect for human rights is integrated into Kinross’ business through its comprehensive policies and standards and through its commitment to the UN Guiding Principles on Business and Human Rights. Kinross has continued its engagement with employees, local communities and partners throughout the uncertain and unprecedented period since February 2022.

Kinross moved quickly with its transition process and made its intentions clear regarding its business in Russia. See here and here. In April 2022, Kinross announced that it entered into an agreement to sell 100% of its Russian assets.

Kinross is continuing, as much as possible, its ongoing community engagement and programs, as well as keeping stakeholders informed about the transition process. Kinross has also been communicating to its employees regarding the transition process, transparently noting that this is an unprecedented situation with inherent uncertainty. Certain employee engagement programs, such as an annual recognition awards program, are continuing locally.

During the transition process, the Company is prioritizing its employees, and the sales agreement includes provisions for the buyer to continue the employment of the workforce in Russia...

Kinross has a robust due diligence program for all its global suppliers (individuals and entities), in which it screens the supplier and its principals (including beneficial owners) against major sanctions lists. Any red flag is escalated to the Company’s Compliance function to analyze whether or not Kinross entities can do business with such entity/individual. This program also allows for ongoing monitoring of existing suppliers. The due diligence program described above also flags human rights misconduct...

Russian invasion of Ukraine: What companies have to say about their human rights due diligence 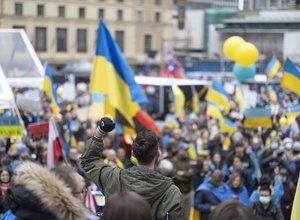