The content in the report is inaccurate and replete with falsehoods.

In the first instance, the report makes the untrue and unfounded allegation that Brandix Lanka violated Covid-19 protocols at their Minuwangoda plant in October 2020, which led directly to the second wave of Covid infections across the country. There is no foundation to this, as declared by the Attorney General’s office. Two separate government investigations were initiated as to “whether there had been criminal negligence or oversight that caused danger to human life” at the Minuwangoda plant in October 2020, which is clearly stated in page 10 of the report. They were later subsumed into one. As acknowledged in the report (on that same page), the Attorney General’s office announced that its investigation found no evidence that Brandix had in any way contributed to the spread of infection. In other words, there is clearly no basis for the allegations made in the report.

Secondly, the report makes similar unfounded accusations of intimidation and reprisals against the unions representing workers’ claims. At one point in this section, the report refers to a statement allegedly made by Mr Ashroff Omar to union officials, that Brandix would not allow any unionisation at any of the factories. This statement is untrue. The report makes specious use of this statement to suggest complicity between the government, the military and Brandix in ‘intimidating’ unions and workers with reprisals, which is blatantly false. This is inflammatory rhetoric, not evidence of the accusations in the report.

Thirdly, the report makes an incorrect claim that Brandix escalated reprisals by the government and the military against workers’ unions who tried to stop the International Finance Corporation (IFC) from disbursing a $50 million loan to Brandix for not complying with IFC’s policy on labour rights.

IFC commissioned a third-party labor assessment at three sample facilities, to review labor practices and assess compliance in alignment with Sri Lankan labor laws and IFC Performance Standard (PS) 2. The assessment included interviews with multiple stakeholders and workers’ organizations, including three organizations named in the report: Dabindu Collective, Stand Up Workers Union and RED. The outcome of the labor assessment has been disclosed on IFC’s disclosure portal. For your reference, IFC’s assessment states: “While there is no recognized external trade union in the company, the company’s policy on freedom of association enables the employees to join an external union, should they wish to.”

Lastly, the report relied on interviews with 15 workers – 0.04 percent of the Brandix workforce – whom the authors claim are from Brandix plants, in an organisation that employs over 35,000 workers in Sri Lanka. 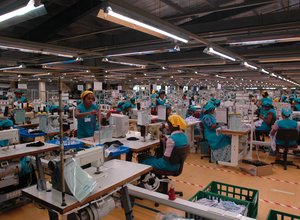