As previously stated, ROCKWOOL is convinced that if we were to depart Russia, our factories and unique technology would be nationalised or otherwise transferred to local players. Since the factories already operate independently of our head office, they would almost certainly continue to operate albeit under different ownership. That would mean that not just the tax on the profits, but all the profits and future cash flows would remain in Russia. We do not see how handing over more income and a well-functioning business to the Russian state or to a Russian competitor would contribute to ending the war more quickly.

It remains our view that by retaining our business, we are doing what is least good for the Russian regime. And of course we will continue to comply with all international sanctions. As also previously announced, we have cancelled investments in Russia for around 200 million euros. What’s more, it is important to note that we do not have a customer relationship with the Russian military.

At the Annual General Meeting on 06 April 2022, the ROCKWOOL Chairman of the Board addressed in detail the decision on ROCKWOOL’s continued presence in Russia. We invite your readers to view the Chairman’s comments beginning at the four-minute mark of the video recording here (English version). 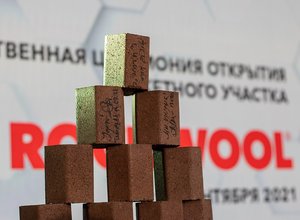